Some of you may have noticed a drop in my posts over the last couple of months. Things here in Korea have been very busy with finishing translations, proofing, and last minute errands as we get ready for the book fair in Frankfurt. I’m leaving today (Monday) for Germany, and won’t have time for regular posts for a while, but I thought I’d share something I wrote last year about the book fair. (This piece will be spread over about three posts.)

As I look at the title of this post, I can see where some of you might be expecting more detailed info about Buddhist books and publishers at the book fair, and as I think about it, that sounds like a great topic for a post. So I’ll take a camera and do some blogging about the book fair when I return. (It’ll be a couple of weeks, though.) 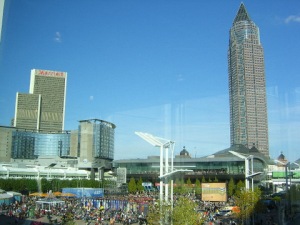 For the last several years we (the Hanmaum International Culture Institute) have been going to Frankfurt Germany for the annul Book Fair. Each year, around 7,000 publishers from more than 100 countries gather in Frankfurt to exhibit their new books and to find books from other countries that might succeed in their country. Publishers try to find foreign publishers who can take the book back to their home country and best publicize the book and get it into stores where people can find it.

This may sound like a very commercial concern for a Buddhist organization, and in a sense it’s true. For “commercial” also means popular, something which many people are interested in. Our mission is to make Daehaeng Kun Sunim’s teachings widely available to people who don’t understand Korean. Thus, beyond just translating those teachings, we have come up with ways of reaching people. One way of doing this is through books that interest people, books they want to read. If we can produce books that have a lot of appeal, publishers in other countries will want to publish them, thereby making it easier for people in those countries to encounter Kun Sunim’s teachings.

I used to think that the translation was 90% of the work, but now I know that it’s barely 50% of what must be done. No matter how wonderful the content, if the look of the book doesn’t appeal to people, they won’t pick it up and won’t discover the content. The cover has to be interesting, the title must touch something within one, and the text layout and paper must draw the eye. Once those things are in place, then the contents can shine.

The Road to Frankfurt 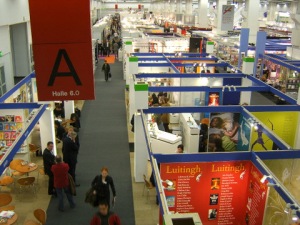 Much of the year at the Hanmaum International Culture Institute is spent preparing for the Frankfurt Book Fair, but the last six weeks are the most difficult. It will take two weeks to print the books, so we actually only have four more weeks to work. The ladies doing the designs and layouts have to get the text and then adjust the format so that it feels comfortable to look at. Once they’ve done this, everything has to be proofread again.

The programs for publishing are very fussy, and often create “broken” characters. Somehow there was a computer code conflict and the program turns a word or character in to nonsense garbage. And sometimes it was a person, working at three or four in the morning whose eyes were too blurry. These new changes are made, and everything is proofread again. And then again. Once the file is sent to the printers, we can begin work on the publicity materials, such as brochures, posters, and handouts.

This year our new books of Kun Sunim’s teachings arrived on Saturday evening, and we left on Monday morning, and I think the books were still warm from the printing presses!

8 thoughts on “Books and Buddhism: at the Frankfurt Book Fair”