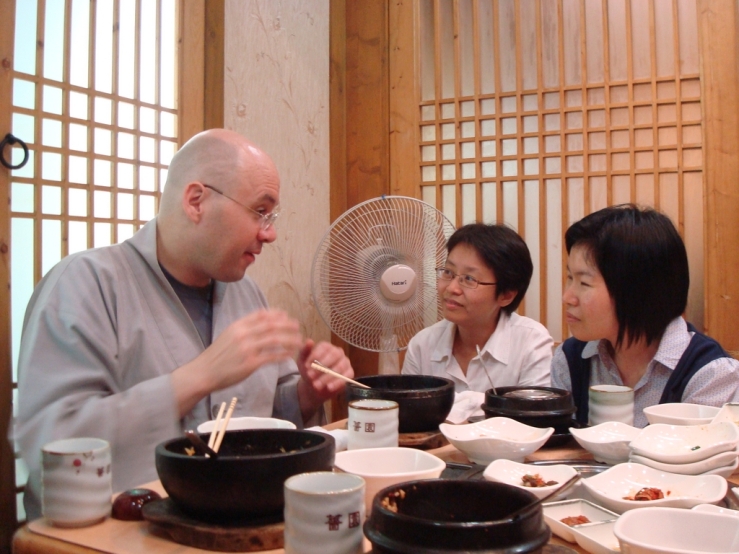 You’d think, from the picture, that we are all in Seoul! But in fact this photo was taken last night in the best Korean restaurant in Bangkok, Jang Won on Sukhumvit soi 12. Twelve people came along to meet and eat with Chong Go Sunim and we were very kindly given a private room and the food and conversation was wonderful.

Earlier in the day some of us travelled down to Nackom Pathom to see one of the oldest and largest Buddhist structures in Thailand, a huge stupa with very beautiful shrine rooms around the outside. We also stopped off at Buddhamonthon, a large Buddhist park with a magnificent statue of the Buddha in its centre.

Today has been equally busy, with another magnificent lunch at the wonderful Indian restaurant Annapurna (on Tanon Pan, near the Hindu temple) with Chong Go Sunim, Phra Pandit Bhikku and a dozen or more people from Bangkok’s ‘Littlebang’ Sangha. At the prompting of the Brits in the group, deserts were had at the nearby British Library restaurant!

Food, and ancient sites, and great weather, form, of course, just a very enjoyable backdrop to the real business of this visit. People are getting to know each other better, friendships are being made, and made stronger, between Dharma brothers and sisters, and everyone is busy listening to and sharing the Dharma.

The full one-day workshop led by Chong Go Sunim takes place this Saturday and if you’re in Bangkok and haven’t already signed up, well, I’m sure we can squeeze in one or two more people! Click on the link on the sidebar for more details. And see everyone on Saturday!

5 thoughts on “a Bangkok update…”