Together with Wonhyo’s Inspiring Yourself to Practice, and Chinul’s Admonitions to Beginners, this forms one of the fundamental texts of Korean Buddhism. Originally intended for monastics, practitioners of all backgrounds may find this useful and inspiring. It’s a fairly long text, with 10 parts, so I’ll post each section separately. It was written at the end of the Koryo dynasty (~1394~) by a Korean monk named Ya-un (野雲和尙), and I did the English translation.

My own true self! Listen carefully! 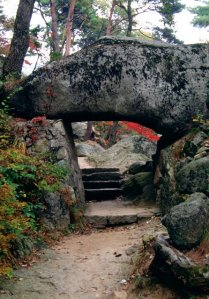 There have been so many people who have achieved enlightenment by dissolving all attachments and aversions.[1] Why do you still linger within the realms of suffering and defilements?

For endless lives, you have turned your back on your true nature, and through clinging and attachments have fallen into ignorance. Committing all kinds of unwholesome acts while not cultivating the roots of goodness, you have repeatedly fallen into the sea of karma that leads to rebirth as one of the four types of lives. [ii]

The body follows the six senses. Thus you will suffer immensely if they lead you to be reborn in an unwholesome place. Having turned your back upon the transcendental teachings of the Buddha,[iii] even if you are able to be reborn in a human realm, it will only be before or after the appearance of a Buddha. Fortunately, this time you have received the body of a human, but you have been born long after the Buddha’s entry into Nirvana. This is heartbreaking, but whose fault is it?

Nevertheless, if you sincerely repent and want to change your direction, then cut off all attachments to the world. Leave home, carrying your bowls and wearing the kasa, and take the direct path and learn the profound Dharma, which is free of all defilements. Like a dragon in the ocean depths, or Spring coming to a mountain, this profound truth is utterly inexpressible!

People have a past and present, but the Dharma is neither far nor near. People can be wise or foolish, but the Way is neither strong nor weak. Even if you had lived at the time of the Buddha, what would it have benefited you if you didn’t follow His teachings? Even though you live in a period of decadence, if you believe and live according to Buddha’s teachings, the benefits of this will be beyond measure.

Thus the Buddha said, “Like a good doctor, understanding the disease, I prescribe the appropriate medicine. The doctor is not to blame if the patient refuses to take the medicine. Or like a good mountain guide, I show people a safe path. If people ignore the directions he has given, it is not the fault of the guide.”

“The Dharma, which is beneficial to myself and to all beings, is omnipresent and inherent within all. Thus, even if I were to remain longer in this world, there would be no additional benefit. If my disciples continue to practice the Dharma without ceasing, then the Dharma-body of the Tathagata will never disappear.” If you understand this truth, then you will regret only your own lack of practicing, rather than worrying about things such as the decadence of the era.

I sincerely hope that you develop a resolute and expansive mind, and determine to completely cut off all ties to the mundane world, and get rid of all delusive thoughts. Thoroughly investigate the hwadus [iv] of the Patriarchs, attain the highest wisdom, and thus overcome the great matter of birth, aging, suffering, and death. Make the attainment of ultimate enlightenment your goal. Don’t take this lightly, don’t step backwards.

In this age of degeneration, it has been a long time since the Buddha left. Mara has grown strong and the Dharma has become weak. Those who lead people astray are many, while few are the ones who correctly show the path. Wise people are few, while the ignorant are many. Not only do they ignore the Buddha-dharma, but they also distract others. It’s not possible to talk about all of the hindrances to spiritual cultivation.

Worrying that you might go astray, I have outlined ten points to be cautious about. Please believe what I say and do not violate any of these points.

If you are ignorant and do not study,
your arrogance alone will increase.
If you do not polish the darkness of your mind,
your egotism will only deepen.
To have an empty stomach and a haughty mind
is to be like a hungry snake,
or an ignorant and lazy monkey.
Although you readily listen
to harmful and evil speech,
you purposely ignore the teachings of
the Buddhas and Bodhisattvas.
If you have no affinity with
the good path,
who will be able to help you?
Following the six senses,
leads only to terrible suffering.

[i] Literally, “…achieved enlightenment through the gate of emptiness.” This can mean a deep experiential understanding of emptiness, or it can also mean making your behavior and thought in harmony with the principles of emptiness.

[ii] Lives born from wombs, eggs, moisture, and through transformation.

[iii] Literally, the One Vehicle.

25 thoughts on “the Venerable Ya-un – Admonitions to Myself”