All the people I meet, especially people I care about and who care about me, are my potential teachers. That is just how I look at life.

I met my Zen teacher, Chong Go Sunim, in 2007 and liked what he’d said about just about everything we spoke of. I’d never met Daehaeng Kun Sunim, his teacher, but I read her books, saw her on several occasions, and I bowed to her in respect, several times.

As with anything, I don’t accept all aspects of Buddhism, or Hanmaum Zen, which in Korean is called ”Seon”, but Han-maum, or One Mind Zen has at it’s center of understanding, a beautiful way of looking at reality; namely it says that our inherent nature is interconnected with all things. It also says that if we let go our worries, concerns, and desires to this “foundation”, they will find themselves-through our conscious effort of letting go of them-solved. This takes place in the interconnectedness of all things, working together. This is called Juingong. But you could call it God, if you want.

It is just the words that are different. You see, in Hanmaum, we “put our worries and concerns in our Juingong”, but I have realized it is the same as praying to God. I mean, I realize it doesn’t involve speaking to God, but you could do that too, if you believe in God. But if I release my worries and concerns to my foundation, does God not hear this? Of course not.

What I love about Hanmaum, though, or Zen, really, is that it doesn’t conflict with science, or any faiths, if you truly understand it.

In a funny way, it’s like The Force, in Star Wars. All life is bound by and penetrated with this oneness, and its energy emanates from all things as well. To me what people call “God” is like this; in everything and everywhere, and so what you call him doesn’t matter (those of you seeing God as something moe or less than male, please pad on my use of the masculine pronoun. I do so in the interest of convention according to standard English). The proof of that is all the names he has. In English it’s God. In Korean it’s Hana Nim (First Man, or First One), and in other languages it is other things. Do you think he cares? It is your heart he hears, not your tongue. He’s God. He’s not bound by the same physical limitations that you and I are bound by. I guess I should say here that I am not arguing a case for the existence of God, but I am arguing a case for the oneness of all things, and if one believes in Juingong, or God, it really doesn’t matter, not too much to practitioners of Hanmaum, anyway, and frankly, to me, that’s beautiful; no dogma here.

To me, Zen meditation can be utilized by anyone at any time, regardless of his or her religious practice. It is a tool for peace, harmony, and relieving oneself of useless worry, greed, and harmful states of mind that give rise to our misfortunes. It brings enlightenment. The main practice in any form of Buddhism, or Zen, is to meditate, which bings one the ability to live, as opposed to unconsciously.

I think Christians and Muslims should meditate. Chistians, especially, often ask me why I cannot just follow God, saying, ‘if you did that’, you wouldn’t’ need meditation’. I love people for caring about me this much, but people who say such things-in my opinion- betray a fear of solutions that can be added to their spiritual ‘kit-bag’, and they are basically saying something tantamount to, ‘hey, I got God; who needs penicillin, or stretching before running, or hammers?’

Though I think of myself as a Zennist, and I am in awe of many of the realizations Siddhartha Gautama had, I am not a Buddhist in the strictest sense, for Buddhists believe in rebirth. I am not sure about this. Actually, I am pretty sure I do not believe in  it, insofar as it means (to some) that my whole consciousness will be reborn in another life-form. I am not sure the Buddha meant that anyway. I think reincarnation and rebirth are vastly different, anyway, but I  don’t prescribe to either notions. 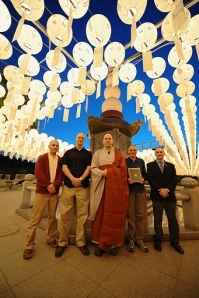 Buddhists also want to be  from the cylce of existence. I do not want to be. I love existence. What else is there? It makes sense, though, that Siddhartha Gautama would have wanted to find a release from the cycle of rebith, as he was raised in a Hindu nation, and the going idea was that you could come back as a worm, or an ant. Who would want that? Sheesh! But I do believe the basic teachings of The Buddha, just as I believe in what Jesus taught*.

I am a Zennist because Zen meditation makes my Christian practice better, and by that I mean my practice of loving others. Period. And as much as I am a Buddhist, because I believe in the basic idea that everything is in our minds, Zen meditation makes my Buddhist practice better. It is a wonderful tool. And to be a better Zennist just means to meditate often, so as to stay more “in the moment”, and less in the ego.

* I am actually quite interested in the Gnostic gospels, which reflect ideas and teachings attribited to Jesus that were not permitted into the book we commonly call The Bible. For an accurate and fair assessment of  the origins and history of that book, read world renowned biblical scholar Dr. Bart Ehrman’s Misquoting Jesus: Who Changed The Bible And Why

Dear Viewer: Thanks for looking. I am a teacher, writer, artist and thinker from New York working and living in Japan. if there is anything I can do to help you, let me know. Peace, CA View all posts by Carl Atteniese

16 thoughts on “A Better Zennist”