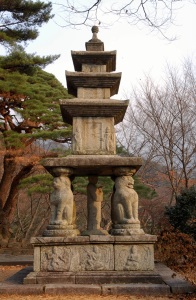 There’s a story in the sutras of a woman who was so filled with resentment over the way she was treated that the Buddha remarked she wouldn’t be able to become enlightened until her next life, when she would be reborn as a man. Some people have wildly misunderstood this to mean that women can’t become enlightened. (“Urm, don’t we all have the same Buddha-nature? Isn’t it equally present everywhere?”) But the key here isn’t that she was a woman, but that she just couldn’t let go of her resentment as long as she was still being treating unfairly.

Male, female, justified, unjustified, isn’t the point: It’s things we aren’t letting go of, things we aren’t trusting our inherent Buddha essence with that are keeping us from moving forward. It could be resentment at how we were treated, anger, lust, love, or sadness. It could also be an unwillingness to let to of feelings of joy and the thrill of a spiritual experience. And it could be concerns about politics.

Be responsible, take care of what needs doing, but we need to entrust even that as well. As the Bible says so well, we own only our labors, not the fruits of those labors.
Let go of even politics, of even justified resentment, and trust that our true nature is sorting it all out, if we just take our fingers out. Let’s not become people who can only make progress in our next life, at some place where things would (hopefully) be better.

(This text is from a new Dharma talk we’re working on)
People need to working at relying upon their foundation, but instead they spend their time complaining about what other people are doing, or meddling in other’s lives. Do you really have time for that? The house is on fire! You have only a few moments to find a way out! Are you really going to spend them standing around criticizing others?
…
So you must let go of everything, and just rely upon this one pillar of mind. In truth, everything is already flowing like that, so just don’t try to cling to ideas or events. If, with a wise thought, you can leap over these things, your life and family will be relaxed and comfortable. Wouldn’t this be a better way to live?
What I’ve just said is the most important thing I’ll say all day. It’s so precious! Our lives continuously circle this fundamental mind, as fast and ceaseless as a propellor spinning around its drive shaft. If you let your life flow like this around your fundamental mind, there will be no place for illnesses and such to stick onto.
I wish people would take this fact and treat it like the jewel it is, cultivating their faith in it and entrusting everything to this pillar of mind. But they don’t seem to do this. I’m just telling you about how the world is working, nothing more, and yet still people don’t work at living in accord with this. Instead, they follow distorted paths, living upside-down lives, and so experience every kind of hardship.
If they could just live in tune with this truth that everything is already following and moving according to their fundamental mind, then they would radiate joy and wisdom, and would live out their full, proper, span of years.
Even though everyone is inherently free, you have to know how to act free in order to actually be free. You have to keep taking what you understand and putting it into practice. Start with where you are. Look at how we build a house: you start with leveling the dirt and building a solid foundation. Then you need to know how to build the walls, floor, and roof. You have to figure out how to do all of this to end up with a useful building.
You have to practice like this, taking one thing after another as they come to you, combining them with your fundamental mind, and then observing and putting the results into practice. Then you’ll be able to freely move between higher and lower realms, going wherever you’re needed. This is why the Buddha asked, “Who has my skin?” “Who has my flesh?” “Who has my bones?” and “Who has my essence?” Seon masters have said similar things to their students.
Also, you shouldn’t concern yourself with other people’s level of spiritual practice. Or compare yourself to them. Just focus on putting into practice what you’ve learned and then leap over the things you’re stuck on. If you keep doing this over and over, eventually you’ll naturally understand everything about different levels of spiritual awareness.