Marcus, who posts here when time permits, was just caught in the earthquake in Japan. We lost contact with him for a day or so, but it turns out he’s fine, some modest hardships aside. He and Ikumi were together during the quake so they didn’t have to worry about not being able to contact each other, and Ikumi’s parents also came through things without suffering any damage. Here’s Marcus’ account of the earthquake.

(Joseph has already posted this at http://somewhereindhamma.wordpress.com/ but I’ll go ahead and repost it just in case someone’s missed it there.) 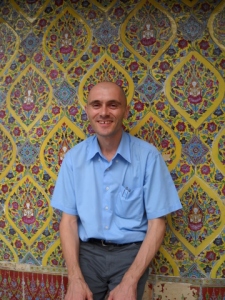 Footnote:
I’ve taken the title of this account from Psalm 46 of Stephen Mitchell’s adaptations.
The first verse of which runs:
God is our refuge and strength,
our safety in times of trouble.
We are calm though the whole earth trembles
and cliffs fall into the sea.
Our trust is in the Unnamable,
the God who makes all things right.