Following on from my piece a week or so ago about entusting and devotion, I’d like to post an updated review I wrote last year of the little booklet called “Everyday Korean Buddhist Practices” by Seon Master Ilta, translated and very kindly gifted by Brian Barry. I think Master Ilta says so much better than I can just how there need be no contradiction at all in combining a very devotional approach with the practice of uncovering one’s own true nature. 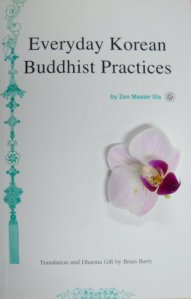 Master Ilta, Grand Preceptor and member of the Elders Committee of the Jogye Order. Brian Barry, temple artist, Dharma Instructor, and translator of many key Korean Buddhist texts, translated, published and distributed this work free of charge as a Dharma gift dedicated to all beings throughout the universes. He is also active on the Seoul Dharma Group and is a thoroughly nice man.

The book is divided into five sections. The first chapter is called ‘Effective Chanting’ and deals with the lay person’s approach, and the three empowerments practice brings. Part two is the main part of the book, and concerns daily practices. Many people outside of Korea who come across Seon Buddhism might perhaps think that this would deal with meditation, but most Buddhists, even many Zen Buddhists, do very little meditation at all, and this chapter deals mostly with the practices of prostrations and chanting.

I personally find it hard to maintain a prostration practice, especially here in Bangkok. There have been times I’ve started each day with 108 bows, and have benefitted enormously from it, but my favourite practice is Avalokitesvara chanting, about which Master Ilta has some interesting and useful things to say in this small book. He says it’s useful to have an image of the Bodhisattva while chanting, and I noticed with delight that Brian Barry generously included in each copy a postcard of one of his own gorgeous paintings of Kwan Seum Bosal. 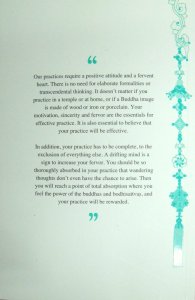 Master Ilta talks about how, wishing to receive compassion, “it is both natural and essential that you lead a compassionate life yourself” and he emphases the importance of maintaining one’s resolve. He also discusses visualisation, prayer, and using beads. My own beads were a beautiful gift from my Dharma brother Joseph. Each one has the hangul for Kwan Seum Bosal carved into the wood, and they are a joy to hold. Not all the advice Master Ilta gives will apply to everyone of course, his suggestion about making as many repetitions as possible in a single breath, for example, is not something that works for me.

The final sections of the book are on special methods and spirit guidance, in which he talks about the practice of Namu Amitabul chanting, Namu Jijang Bosal chanting, chanting the Great Light Mantra, and reciting the Teaching for the Departed, the Musanggye, which Brain Barry adds as an appendix. Finally, Master Ilta concludes with a story, illustrating his central theme of one-minded devotional practice.

It is a book devoted to the everyday practices of, especially, chanting and prostrating, with a real ‘other-power’ feel to it. “In Buddhism” Master Ilta writes, “our practices are our very faith, and this faith is in the power of the buddhas and bodhisattvas to help us in times of need. So it is necessary to put our faith in them and their powers”. So how, it might be asked, does this fit in with the idea of relying upon one’s own inherant Buddha-nature?

For Seon Master Ilta there is no contradiction. The devotional practices he outlines exist for the very purpose of reaching one’s own foundation. “The nonduality of the practitioner and Buddha is the True Self” Master Ilta writes. “The only difference is that the Buddha recovered his essential nature, while we have not. The objective of our practice is to discover this true nature and to realize our full potential.”

This reminds me very much of what Daehaeng Kun Sunim also has to say about the practices of bowing and chanting. “True bowing” she writes “means keeping yourself humble and respecting Buddhas, Bodhisattvas and sages. But at the same time, know that their mind and your mind are not two, and never lose your determination and resolution.” In a section of ‘No River to Cross’ on reciting the Buddha’s name she warns against simply looking for light from outside. For Daehaeng Sunim the power of chanting is from the power of the foundation.

What ‘Everyday Korean Buddhist Practices’ does is provide a wealth of advice and suggestions on some of the technical aspects of these practices, in a way that never loses sight of the main goal – to, as Mastar Ilta puts it,  “bring about the force from within”. This marvellous little book has been widely distributed, entirely free of charge, to Seon centres around the world, and Brian even kindly sent some extra copies for the Hanmaum Seonwon here in Bangkok. It is well worth finding for both its insight into everyday Korean Buddhist practice, and for inspiration too. Thank you Brian.