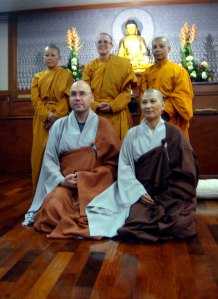 Phra Pandit Bhikku, who so kindly supported the workshop through Littlebang in the weeks leading up to it, had warned me that some people who sign up for retreats don’t turn up on the day for one reason or another, but my fear was greater than that, I was worried that almost nobody would come at all.

But after the first sitting meditation I opened my eyes and saw that all my worries were groundless. As we were sitting, Dr Lee Bhikkuni and two other Bhikkunis in their Thai orange robes had come in and taken seats, here from their centre in Rayong to support the event. And behind them sat some 25 to 30 participants, all enjoying that first deep restful sit.

Then Chong Go Sunim spoke about just what we do when we practice. I didn’t take notes, rather I listened intently. The hall was silent and Chong Go was unhurried, he didn’t use a microphone and that helped establish a calm and concentrated atmosphere. I became at ease. I smiled, glad of this chance to hear the Dharma.

“My own teacher” Chong Go Sunim said, talking about Seon Master Daehaeng Sunim, “describes it as having something like a furnace within yourself. But don’t just let go of problems, you can go even further. Let go of your whole self. Let go completely of even what you think you are. And then you can move beyond any limitations.”

There was a short time for questions and then we stopped for lunch – and more questions. Chong Go Sunim talked to everyone, was available to everyone, and spent time listening to everyone. And we all asked questions. About practice, about Karma, about the name and nature of this inner essence, about all aspects of the teachings.

One of the best features of the day was, for me, this encouragement for everyone to talk and to share their experiences. Rather than just a series of lectures, this was a true group workshop. After lunch Chong Go split everyone into groups to discuss how, in our daily lives, we strengthen the light within us and develop our spiritual muscles.

In my group George talked about climbing the steps of the BTS and reciting “here” and “now” with each footstep. Someone else talked about the walking meditation she does around her bed morning and night. Lynn talked about her relationships with friends and family and how, ultimately, no one can carry out spiritual practice for you.

After the feedback session we practiced some walking meditation in the Korean style, which is very different from the slow individual style usually taught here in Thailand. Walking around the Dharma hall in a large circle, each time I passed the window, the red flowers on the trees outside became more and more intensely beautiful. An experience I shared later in the afternoon.

After some tea we split into a singing group (Joe, the Seonwon’s music teacher, kindly came by for this) and a Sutra copying group led by Chong Go Sunim. I joined the writing group with the others afraid of singing, Don, Ralph, Nat, Paul. We copied, in English, from the Great Compassion Dharani. A wonderful way to allow the teachings to sink deep.

Hyedan Sunim then led us in some bowing, and explained the spiritual as well as physical aspects of the practice, and a small choir from the Seonwon sang a Dharma song which Chong Go Sunim introduced by giving us the translation and meaning. The day ended with a small closing ceremony of bows, refuges, vows, and the the Great Compassion Dharani.

It was, for me, the most nourishing English-language Dharma event I’ve ever attended. The atmosphere throughout was quiet but light, there was a closeness between everyone that was almost intimate. Chong Go Sunim led us, but we all seemed to move as one body anyway. And I came away both nourished and refreshed. It was beautiful.

(And thank you to Nat for the image!)

3 thoughts on “notes from the workshop”