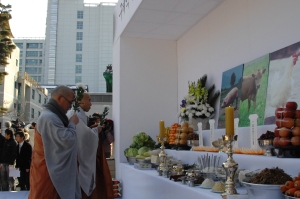 There is an on-going merciless holocaust taking place, across the entire world, involving torture, brutality and death on an industrial scale. It’s partly hidden, partly just accepted, and though trying to do what little I can about it has been an important part of my life for the past three decades (since first becoming vegetarian), it’s not something I’ve brought up here on this blog – until now.

And even now, I’m not going to trot out the usual arguments and Buddha quotes supporting the non-killing and non-eating of animals. Rather, I just want to help publicise a campaign against one recent aspect of this daily nightmare which specifically concerns Korea, and which I’m sure all readers, vegetarian or otherwise, will also support.

According to the Asia-Pacific branch of PETA, since the outbreak of foot-and-mouth disease in late 2010, approximately 1 million animals have been killed in Korea, many of them buried alive in mass graves. Large numbers of pigs have been dumped from trucks into pits and then covered in soil, where they slowly suffocate to death.

Some animals remain alive in air pockets but are unable to move, sometimes for days, before they eventually die from trauma, starvation, or dehydration. Using live burial as a disease-control method violates both the domestic animal protection law and Korea’s obligations under the World Organization for Animal Health’s Guidelines on the Killing of Animals for Disease Control Purposes.

PETA has contacted the relevant Korean authorities to ask for a more humane death for these animals but has received no response. And so are now asking for individuals around the world to contact South Korean embassies to ask officials to pressure the South Korean government to immediately stop burying animals alive and implement humane ways of dealing with the disease.

A suggested letter follows, but it is always better to personalise it, especially the subject line:

I was so disappointed and outraged to learn that a country like Korea, which is known for its forward thinking and modernity, is trying to contain foot-and-mouth disease in such a barbaric way.
Burying innocent animals alive is simply cruel, immoral, and illegal!
These animals slowly suffocate to death in the absence of air.
Worse still, improper burial often allows for air pockets to form, and many animals remain alive, sometimes for days, but are unable to move.
Until this cruel practice is stopped, I will tell my friends and neighbors not to visit South Korea.
Please use your position of influence to help those in need.

I personaly will be emailing the Korean embassy here in Thailand (where I live) this afternoon. And I urge all readers of Wake Up and Laugh to contact the Korean embassy in their countries as soon as possible too. It is, surely, time to speak out.

Updates:
1) Thanks to Chong Go Sunim and Adam at Fly Like a Crow, here’s a report of a memorial service for the 1.9 million animals killed, held at the main temple of the Jogye Order in Seoul. One of the banners read “It must have been painful and you cried a lot. I hope that you go to a good place and enjoy happiness.”

2) There’s another report of the same memorial service on the website of the Jogye Order with some excellent photos, including one I’ve used here. During the service Ven. Hyechong said “Lord Buddha taught us to consider all sentient beings as our parents. If beings were to understand that we are born in different circumstances according to our karma, then we could create a Pure Land where we recognize each others’ value.”

8 thoughts on “speaking out – for animals in Korea”