Yesterday, at the Bangkok Seonwon, in a truly beautiful and deeply meaningful ceremony, everyone renewed their five lay Buddhist precept vows.  Half a dozen people also took them for the first time, and so gained a new Buddhist name reflecting their new paths and aspirations.

The proceedings were led by Haewon Sunim, who had especially and kindly flown in from Korea, and before precepts were given she delivered a short teaching. Luckily for us non-Korean speakers, we had Young there to jot down some instant translations as Sunim spoke.

The part that jumped out most significantly for me was the bit about everything in life being a teaching – but only if you are making an effort and paying attention. If not, there’s no teaching at all. So, yes, everyday life is itself the Dharma, but you must be an active student.

The problem, for me, is remembering. I mean, just hours later I was engaged in a coffee shop debate with all awareness gone, desperate to get my points across. One minute I was saying how most discussions are a waste of time, the next minute I’d lost all sense of my foundation in the middle of one!

But, as Sunim had said at the start of her talk, the very nature of learning is difficult. And that’s why I’m so grateful to all those in the Sangha around me, lay and ordained, that support me so richly. Sometimes we just need that reminder, that our inner teacher is there and is always available. 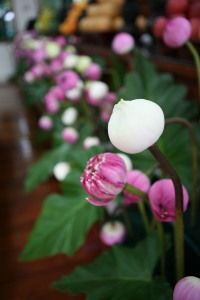 As Seon Master Daehaeng Sunim says in the latest Hanmaum Journal, in words that seem to apply especially to this weekend: “Coming to the Dharma Hall regularly will help you a lot in grasping this fundamental essence, and while relying upon it, whatever you need will come forth.”


(Here’s a post with a bit more about the Five Precepts.)