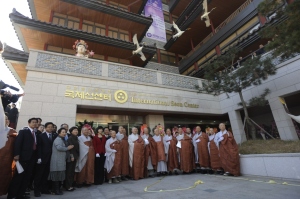 This just in from the website of the Jogye Order:

The Jogye Order International Seon Center is now open to be a center to promulgate Korean traditional culture and Korean Buddhist meditation (Ganhwa-seon) to the world. The opening ceremony for the newly built center in Seoul was held on November 15. Jogye Order President Ven. Jaseung, members of the Council of Elders Ven. Jeongmu and Ven. Jongha, Director of the Bureau of Education Ven. Hyeoneung, Director of the Bureau of Dharma Propagation Ven. Hyechong, President of the Central Council Ven. Boseon, National Assemblymen Choi Byeong-guk and Jo Yun-seon, and local officials and other monks and nuns with over 1000 people attended the ceremony.