I’ve no reason to re-post this except that it brings back such lovely memories. I had a wonderful picture to go with it that Ikumi took on her mobile phone, but that’s gone too. Anyway, it’s a slow Sunday afternoon, so I hope you don’t mind me posting this here now. Thank you.

After thanking the monk and his friend that had given us a lift there, and bowing goodbye, we were instantly struck by the beauty of the place. For a long time I’d been wanting to show Ikumi a traditional Korean mountain temple, one with a stream close by, with rocky peaks rising up behind, with lush greenery everywhere, with architecture and nature rich and serene, and this was perfect.

The name of the temple was slightly different to that on the map, the wooden gates announcing it not as Gwanumsa, but as Kwan Eum Sa. Perhaps the same. And there was a new but traditional Kwan Seum Bosal statue in the main courtyard. Easily one of the best I’ve seen. The Amida in her crown was detailed and precise, surrounded by the most elaborate headdress, and her expression was a sutra in itself. 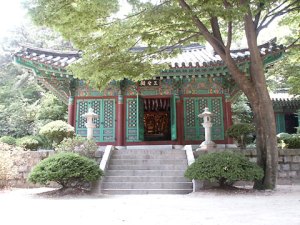 While I performed some bows, Ikumi explored the smaller shrines nearby. There was one for the local mountain god, one for Ji Jang Bosal, and others housing Amida Buddha and Sakyamuni Buddha. The 11am service came to an end and we sat near some ajumas in the shade by a pagoda. We drank our coffee and shared our biscuits and I wished I had learnt just a few more Korean words.

The bench was made from a long thick piece of timber, kept rough in places, smoothed and patterned in others, and it seemed typical of the overall care and craftsmanship to be seen all around us. Nearby was a pile of old temple beams, still painted in traditional colours, now stacked up under a tarpaulin to be used for firewood. I looked, not a nail in sight.

Close to the pagoda were two stone stupas, each containing a small gold Buddha forever looking out through the trees and over the city to a view of the distant Namsan Tower. The only sound was the trickle of the stream and the 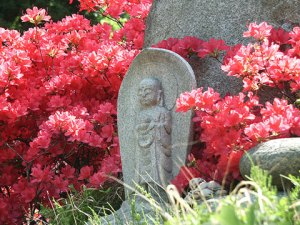 summer insects, and though we had to get back, we lingered as long as we could, returning to the statue and bowing once again – All beings, one Buddha-nature, Namu Amitabul, Kwan Seum Bosal.